Skip to content
You are at The Hub > Reflections > Executive Corner > How about some book discussions together?

How about some book discussions together?

This idea has surfaced from multiple sources within our conservation district community: let’s pick some books to read and then discuss.

Being a book nerd, I love this thought. Being a realist, I also recognize that most of us are way too busy to invest time in something like this.

However, since the idea may have merit — even if for only a subset of our community — I bring it forward with my personal promise to participate if such a group wishes to form.

What am I reading now?

Right now I am reading Unsettled Ground by Cassandra Tate:

In 1836, Marcus and Narcissa Whitman, devout missionaries from upstate New York, established a Presbyterian mission on Cayuse Indian land near what is now the fashionable wine capital of Walla Walla, Washington. Eleven years later, a group of Cayuses killed the Whitmans and eleven others in what became known as the Whitman Massacre. The attack led to a war of retaliation against the Cayuse; the extension of federal control over the present-day states of Washington, Oregon, Idaho, and parts of Montana and Wyoming; and martyrdom for the Whitmans. Today, the Whitmans are more likely to be demonized as colonizers than revered as heroes. Historian and journalist Cassandra Tate takes a fresh look at the personalities, dynamics, disputes, social pressures, and shifting legacy of a pivotal event in the history of the American West. 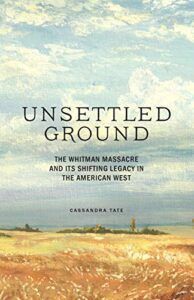 Casssandra’s book has personal meaning for me for several reasons and all revolve around my own connection to people and place.

First, as a child growing up in Washington State, learning about the Whitman Massacre was something presented to me in my schooling. With the improved hindsight that experience and education provide, I see now that the narrative I learned was from the perspective of white settlers. Cassandra challenges that point of view by providing additional perspectives gathered from other sources.

Second, part of my family has been rooted in the Walla Walla region since the late 1800s. My great-great-grandfather on my mother’s side emigrated from Scotland and his son (my great-grandfather) was born in Iowa. Once married, he moved to Minnesota and then to Sunnyside, Washington. A few years later he shows up in Walla Walla and in 1914, his son married in Dixie. Grandma and Grandpa Bruce lived in several places around the region, including Glascow (Montana), Pendleton and Helix (Oregon), Pasco, Prescott, Sunnyside, Dixie, and Walla Walla. Family members have donated some items to the Fort Walla Walla Museum, giving me even more of a sense of being connected to local history.

Third, all of the places I love in southeast Washington were once traveled only by native peoples. Cassandra’s storytelling continually connects me to places I know. It is always more impactful when events happen to people or in places that we know.

Fourth, Cassandra’s book is helping to educate me with regard to equity. Having grown up exposed only to the white settler’s side of the story, her research and writing challenge my perceptions. Being still connected to the people and land makes this more poignant as new knowledge lodges in my mind.

I think that the topics are up to the ground to decide. I know there is interest in exploring topics around diversity, equity, and inclusion. I expect that there would be interest in the natural history of our region, too. For example, another book on my desk at the moment is the Natural History of the Pacific Northwest Mountains by Daniel Mathews. It brings together a host of specialized topics and welds them into a more connected and cohesive whole.

Other reasons for a book discussion group

One reason for reading and discussing books in a group is to help participants explore knowledge and ideas that might not occur to us individually without hearing the thoughts and conclusions of others.

There is a community-building aspect to this, too. When we are able to explore ideas in a civil, gracious manner, we become closer to each other. A stronger community benefits us all.

And for those of us who love books, reading and then talking about that content is simply enjoyable. Some of us knit, some of us rebuild old cars, and some of us read…a lot!

Please do let me know if something like this might be of interest to you. If we get more than a handful of people who show interest, we can talk about this and see if the idea gels for you.

All original content is copyright © 2022 Washington Association of Conservation Districts. You must receive written permission to reuse any of our original works.