Skip to content
You are at The Hub > Reflections > Executive Corner > When will conservation work be on the blockchain?

When will conservation work be on the blockchain?

By: Tom Salzer
In: Executive Corner
Tagged: technology
TL;DR – Blockchain is essentially a database that tracks transactions in a way that resists later changes of the data. There are potential applications in the work performed by conservation districts.

When will conservation work be on the blockchain?

Most of those who read this are likely saying to themselves: whaaaaat? What is this thing called the blockchain?

Blockchain is just a database

Blockchain is a new way of tracking transactions. A blockchain is really just a database, or stated even more simply: it’s a list. If you think of it as a type of database system, it won’t be nearly as confusing!

A blockchain is a growing list of records, called blocks, that are linked using cryptography. Each block contains a cryptographic hash of the previous block, a timestamp, and transaction data. By design, a blockchain is resistant to modification of its data. This is because once recorded, the data in any given block cannot be altered retroactively without alteration of all subsequent blocks.Wikipedia

(Added after publication of this post: A beginner’s guide to crypto lingo on CNN.)

Don’t be too surprised if we begin to see more blockchain-based systems emerge for tracking activities, procuring materials and supplies, accounting for funds, tracking contractual steps including approvals and completion, and more. For example, we already use accounting systems and those are simply specialized databases. Anything that could be tracked in a list or database and needs each change to be tracked could be handled in a blockchain-based system.

Here are a few articles that talk about some practical uses of blockchain systems in business operations:

One of the most important aspects of transactions (or steps) being “on the blockchain” is the resistance to after-the-fact changes. This is where a blockchain system shines because each transaction/step becomes immutable. In turn, that provides high confidence that the information has not been changed. Having a high level of confidence that information at every step of the way has not been changed would have great value when it comes to accounting and contracts.

Using an immutable database seems like overkill in agriculture, doesn’t it? And yet there are some fairly obvious applications when you think about contracts, futures, equipment, and even the application of pesticides and nutrients.

Or even tracking a crop:

Intel later took the same concept and applied it to tracking blueberries from farm to processor. Along the way, sensors kept track of environmental conditions such as light, temperature and humidity, and uploaded the data directly to a blockchain — a digital ledger that tracks every transaction.Capital Press

When will blockchain be coming to conservation districts?

If having immutable records of transactions or steps is important — and it is — then ultimately we may see blockchain-based systems in our conservation district operations!

Grantors may find utility in having grant tasks and the work performed to accomplish those tasks tracked/reported with immutability. Accounting transactions are an obvious application.

Surprisingly, payroll and benefits administration could be enhanced with blockchain technology. The same goes for administering computers, tracking software licenses and software versions, and more.

What about repairing conservation district equipment like vehicles, rental equipment, and the like? Having a complete record of who did what, when they did it, and what parts they used (and where they got them) would ultimately prove helpful.

Here’s another relatively mundane example: new tires on a vehicle. If those tires are tracked on a blockchain from the time they are manufactured to when they are installed, inspected, rotated, and repaired, you would know almost everything you need to know about the tires, and you would be very sure of the accuracy of the data. Imagine that somewhere down the road (pun intended!) those tires are found to be defective. Knowing in intricate detail every action in the lifespan of those tires — your specific tires! — could save you a ton of time that would otherwise be wasted in investigating the defeat or failure, arguing your case with a vendor, or even defending yourself if a failure resulted in an injury.

It’s a lot to wrap your head around

I know the idea of capturing detailed records in a way that chains them together and makes them unchangeable is overwhelming. Really, it’s pretty mind-boggling. But it is aligned with the concept of becoming more driven by data, something that has been a recurring theme over the past few decades.

Doing business in this way could be a fundamental change in the way that business is conducted everywhere. Products are produced all over the planet that conservation districts end up using. Services are provided to districts through various agreements that require specific approval and completion steps. The potential uses of blockchained data are likely far beyond the few examples I’ve described.

Background…or how I dove down the blockchain rabbit hole!

That’s a good question. The thoughts I’ve outlined emerged when I started thinking about how we can create a greater sense of value for the conservation work done by conservation districts and partners.

The stock market, cryptocurrency, and the dollar

In my free time, I’ve been occasionally checking into the stock market, watching it bounce around as elections concluded, COVID-19 impacts were felt, corporate earnings were reported, jobless claims were filed, and so much more. It’s been an entertaining roller coaster ride the past handful of months.

I do have some funds in the stock market — not a lot, but just enough to be interested in what is happening to them. They range from exceptionally conservative choices to a few pretty wild gambles. 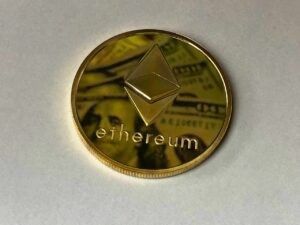 And then I learned about cryptocurrencies (aka “crypto”). I researched, I talked to a few folks, and then I decided to put a little bit of money into crypto to learn the old-fashioned way: dive in and learn through personal experience.

(In retrospect, I detect that this is something of a habit for me. Throughout my life, I’ve tended to just try things and see what I could learn. My mantra for years has been: if not me, then who? Of course, my preference for experiential learning may not be your cup of tea!)

The turning point for me in deciding to dabble in crypto came when I realized that the money I have in the stock market is really just an idea. While it’s in the market, I can’t touch it. I can’t put it in my wallet. I can choose to wait for it to grow (or not). I can get cash for it if I need to spend it. It has value because someone else wants it. Crypto seems much the same.

Value used to be based on gold, now it’s based on belief

Before I was born, the US dollar was tied to gold, but FDR severed that tie to gold in 1933. In 1971, Nixon declared that the United States would no longer back the dollar with gold. Now the dollar is simply backed by the word of the US government.

Crypto seems to have some similarities in that it is an idea, and that idea or concept has value to people. Like the dollar, that value is no longer connected to anything real, at least not compared to the way it used to be tied to gold. Today, the value of the dollar seems to be more based on faith and belief.

If that’s not a disturbing concept, I don’t know what is!

A car has a value measured in dollars. It also has a value measured in crypto. So in my logic chain, dollars and crypto seem much the same. But of course, they are not the same. The US dollar is backed by the United States government. Crypto is backed by…who, exactly? At this moment in the United States, cryptocurrency is largely unregulated. The crypto world is pretty much the Wild Wild West so I expect we’ll hear some horror stories about it before too much longer. And it all seems very mysterious. (If you want to take a deeper dive into why currencies and crypto have value, I suggest this starting with this article: Why Do Bitcoins Have Value?)

And then I caught myself wishing we had a way for people to invest in the idea that conservation work provides value.

Why don’t we have an exchange where people could invest in conservation?

Just as the stock market allows entities to trade securities in an organized fashion, so too do cryptocurrency exchanges allow trading. Thus, we see much the same activity in crypto as we do in stocks: people buy and hold as long-term investments, or they trade daily to try to harvest profits, and they do everything in between.

Wouldn’t it be great if we had an exchange where people invest in the conservation work that benefits their communities? If value is really just an idea, then clearly what conservation districts do for and with their constituents has substantial value!

Well, we don’t have a “conservation exchange” in the same way that we have stock exchanges and cryptocurrency exchanges. Nevertheless, I do think there is a messaging opportunity that involves describing the value of conservation work.

I think that sometimes we miss the boat when it comes to looking for monetary support. Often, we ask for donations or matching funds. However, asking others to give you money may not be as impactful as describing the value that the district or project will provide: clean water, clear air, healthy habitat, sound businesses, and strong communities. Those are important attributes that have value to folks because of the benefits provided by investing in the great work done by conservation districts and partners.

My takeaway as I think about conservation work and the value it brings to people and places, and to creatures and communities, is about creating a greater sense of value when we describe the ways our work helps/benefits others.

Perhaps it is easier to think of it this way, though: if something as nebulous and untouchable as the blockchain and crypto have monetary value in the minds of people, then surely real things like riparian zones, cover crops, soil carbon, and more can have significant value? Conservation districts create value that is real and touchable, producing multiple benefits for others. That is something worth investing in!

All original content is copyright © 2022 Washington Association of Conservation Districts. You must receive written permission to reuse any of our original works.